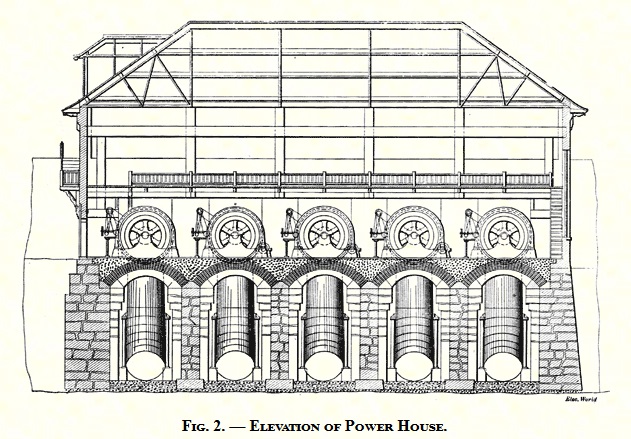 Hydropower was the first large-scale renewable energy source used in the US. Many of the hydro sites where RUS works today are well over 100 years old. While we all count on the reliability of hydropower, it is easy to forget how revolutionary the idea was in 1895 to transmit generated hydropower over cable lines to homes and businesses.

We recently ran across a book called Men and Volts: The Story of General Electric, written by John Winthrop Hammond in 1941. Hammond explained that twenty-five GE motors (newly installed in 1895) drove all the spindles in the Pelzer Manufacturing Company’s Upper Mill, which was the first cotton mill in the US to use transmission cable. Captain Ellison Smythe, the mill’s owner, showed true courage to sign a contract for electric motors instead of the mechanical rope drive that his other mill’s used. The public was skeptical – and the mill hands were convinced that the scheme would never work.

“On the day the mill started operation, a kind friend approached Captain Smythe … and offered his condolences on the failure of the electrical transmission system. ‘I’ve watched those wires all day,’ he said, ‘and they haven’t moved yet.’” The story is told that mill operatives placed pails beneath the wires, in order to “to catch the electricity that fell off.”

Those same electrical motors that successfully powered Pelzer Manufacturing quickly became a hit with other industries, including “mines, shoe factories, yarn mills, tanneries, powder mills, watch factories, and even for blowing church organs.” And Smythe did not stop there – the Pelzer Manufacturing Company’s Upper Mill was the first mill in the country to use incandescent lighting.

At RUS, we know that hydropower is renewable and reliable – and we appreciate that it is also historic. Thank you to the visionaries of 1895!

Our value is in our workforce.
Proud to be Veteran Owed